Google Analytics can be a labyrinth. From simple session tracking to the User Explorer report, Analytics can do a lot and it can be overwhelming to try to learn all of its tools and capabilities. Luckily, Google created a demo Analytics account based on traffic to their merchandise store that anyone can get access to and learn from. In this blog, I’m going to walk you through gaining access to this demo account and give you three reasons why it’s beneficial to learn from it.

And now, three reasons you can learn a lot from this account.

Reason 1: They get Thousands of Visitors a Day

Google knows that sample size matters so instead of trying to learn from your own website (which may not get very much traffic), you can use their demo account that gets thousands of sessions per day. I cannot state how useful this is. One thing I consider on a daily basis is sample size. All things equal, the more data you have the more you can do with it. With the amount of traffic this account gets, you can determine with a decent amount of certainty which source has the highest conversation rate, which region visits the most pages on average, etc.

Reason 2: You can Experiment without Breaking Things

One of the risks of playing around with Google Analytics before you know what you’re doing is altering or erasing historical data. Well, you don’t have to worry about that here! You have enough access to learn, but not enough to mess things up for everyone else. So have fun, try new things!

Reason 3: Many Features are Already Set Up

Many advanced features have already been set up in this sample account. Things such as enhanced ecommerce, Google Ads (formerly AdWords) linking, dashboards, custom reports, etc., are already in place. This saves you the trouble of trying to figure out the implementation on your own. You can look at how they set things up and replicate their settings modify them based on your needs.

So there you have it. If you followed these instructions you should now be able to view the Google merchandise Analytics account and you know three reasons why it will be beneficial to you to learn from it.  This won’t magically make Google Analytics easier to navigate, but it should help you and provide you with a ball of yarn to escape the labyrinth.

Go to any social media/digital marketing conference and you’ll most likely see at least one class titled “How to Hack the Facebook Algorithm”. Everyone in the social media marketing industry is constantly trying to figure out and asking themselves, “how do I get Facebook advertising to work for me?”

According to Social Media Examiner, 51% of marketers don’t feel like their efforts in Facebook advertising are paying off. So what is happening? Why are so many marketers struggling to find success with Facebook? How do you hack the Facebook Algorithm?

Those who don’t adapt, die. Let me show you one example of a simple Facebook hack we used at Epic to adapt. Many marketers have griped and complained about how the upcoming targeting changes on Facebook will negatively affect their advertising efforts. At Epic Marketing, our focus is on the bottom line. It’s what we do. We just do what we need to do in order to help your business grow and thrive by combining technology and our experience and insights. For example, while you might not be able to target individuals with certain “interest” or target “income” levels after August 15th, you can still create an Engagement Audience comprised of those individuals now. In other words, you can create a video targeting those “interest” or “income” audiences now, and create a custom audience comprised of those individuals who watched the videos longer than 3 seconds.

By doing this, you’ve now changed these individuals from a third party source, to a first party source you can remarket to indefinitely on Facebook. This huge hairy problem is now solved simply by thinking through the problem a little bit.

When your company or agency faces a large shift in the landscape, do they complain and throw their hands up? Or do they adapt? Digital marketing is constantly changing. Old norms are now out of date. Previous strategies that never worked now do. Purchase behaviors and attention spans change. It’s hard to find consistency in a landscape that is constantly shifting and updating itself so you have to adapt.

So what do we do here at Epic Marketing? What is our “secret sauce”? How are we able to produce results despite the fact that ad costs are increasing across search/social media and Facebook is becoming more restrictive in their targeting options? It’s simple really. We just follow the scientific method when running experiments. Pretty bland isn’t it? 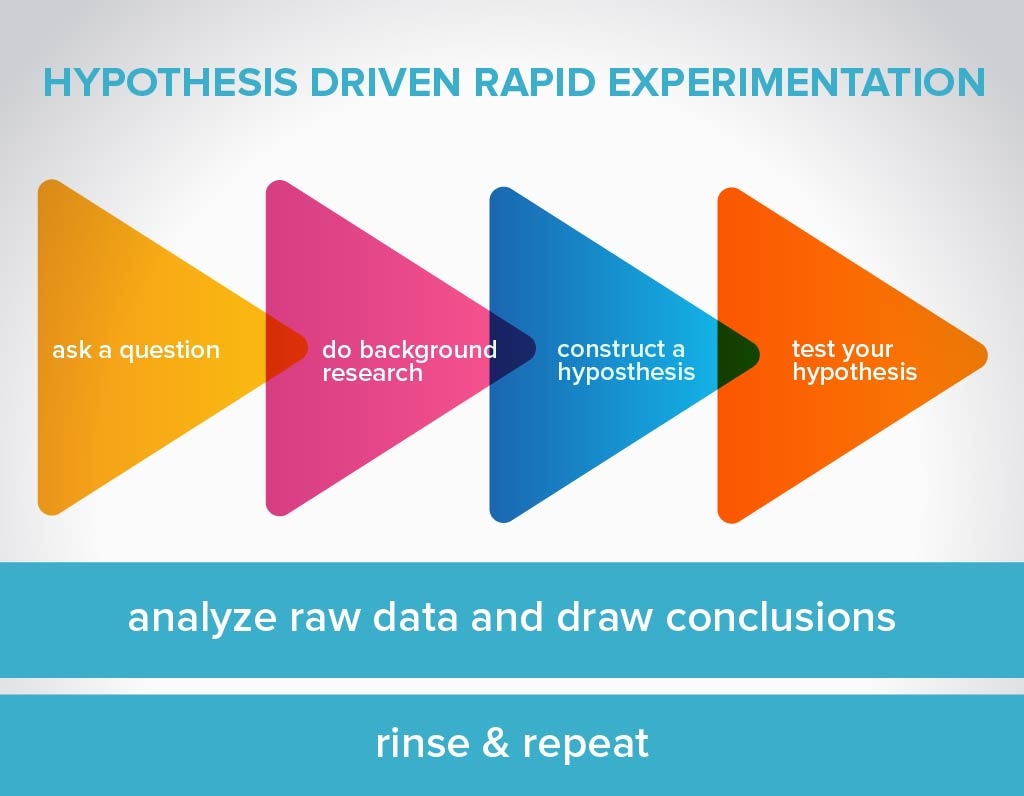 Many marketers say they are “experimenting” but what they are actually doing is blindly guessing and constantly taking a shotgun approach with their strategies. Yes, every campaign takes some time to optimize and at first, especially when you have limited data, often times you are just taking your best guess at how to proceed. However, you shouldn’t be “guessing” 3 months into the campaign. The biggest problem with how a lot of marketers “experiment” is that they leave out one of the most crucial parts of the “experiment”, they forget to actually create a legitimate hypothesis.

“Let’s see what happens” is not a hypothesis. If that’s your hypothesis, you’ll see “what happens” 100% of the time but you won’t be any better for it. A well thought out experiment builds upon previous experiments, but how do you know the right follow up questions to ask if you never created a hypothesis to begin with?

Here’s a brief rundown of the scientific method with direct applications to advertising.

Most people do this. It’s the question that you ask that forms the basis of your experiment. “Will switching images lead to a better conversion rate?”, “Will including the name of the city in the ad copy lead to more phone calls?”, etc.

Again, most marketers and businesses will do this step fairly well. Just make sure you keep notes on where you are getting your information and the process along the way so that you can reference it later. As part of your research, make sure to include both qualitative as well as quantitative data in your reports. Quantitative data is the default metric that most marketers rely on but qualitative data helps paint the broader picture of what is going on.

This is where far too many marketers fall short. Very rarely do they construct a hypothesis at all, let alone do it in a way that allows them to learn from their experiments. Remember that a hypothesis is an educated guess based on all of the research that has been done both internally and externally. This is not a “shot in the dark” at something you think will work. It is a statement of what you expect to happen and typically it is written in a cause and effect format (if _____ happens, we then expect ________ to occur). It’s a statement that is based on your “educated guess” and not on known data.

The other component needed for a well-written hypothesis is understanding what your variables are for your project. A good hypothesis defines the variables in easy-to-measure terms, like who the participants are, what changes will occur during the testing, and what you think the effect of the changes will be.

To create a “testable” hypothesis make sure you have done all of these things:

• Thought about what experiments you will need to carry out to do the test.

• Identified the variables in the project.

• Included the independent and dependent variables in the hypothesis statement. (This helps ensure that your statement is specific enough.)

• Don’t bite off more than you can chew! Answering some scientific questions can involve more than one experiment, each with its own hypothesis. Make sure your hypothesis is a specific statement relating to a single experiment.

This is a perfect example of garbage in, garbage out. You can waste countless man hours, money, and resources running experiments that don’t matter. Experimentation is a mechanism by which we can gain insights and useful information, but it’s not an insight in and of itself. It’s simply just another arrow in our quiver. Experimentation will help us support or refute a hypothesis, but we have to do the work to design a good hypothesis and a good experiment.

Some common mistakes marketers make while testing their hypotheses are:

• Starting with an untestable hypothesis. In other words, not having a reason for why your change will have the desired impact.

• Testing too many variations.

• Not determining up front what you consider to be good. Draw a hard line in the sand.

• Stopping your test at the wrong time. (Here is an online duration calculator that can help you prevent this)

Don’t just blindly follow the data. Generally, a researcher will summarize what they believe has been learned from the research, and will try to assess the strength of the hypothesis. Even if your hypothesis is proven to be false, a strong conclusion will analyze why the results did not turn out the way you initially thought.

Theoretical physicist Wolfgang Pauli once stated “it’s not only not right; it is not even wrong” in reference to the work of another fellow physicist. There is tremendous value in being wrong, the only time we truly fail with an experiment is when the experiment provided no additional information to our path of knowledge.

And herein lies the problem with most marketing campaigns. They don’t build upon the knowledge gained during previous experiments. They run an experiment, observe what happens and then create an entirely new experiment that has little to do with any of the observations from the previous experiments. Since they didn’t create a hypothesis, there was nothing specific to observe and therefore, no specific questions to build upon for the next round of experiments.

Want to see your Facebook ads perform better? Learn to adapt and learn how to perform experiments correctly and you’ll be surprised at the results that you achieve.